Daniel Boone, America’s pioneer hero, is the preeminent symbol for America’s Westward Movement, across its first frontier. Hundreds of thousands of settlers of European descents poured into America’s heartland along Boone’s Trace, passing through the Cumberland Gap. This passageway through barrier mountains of the Appalachians was the original “gateway to the West.” The crossing of these eager, new American citizens was the beginning of an often overlooked quarter century of America’s story. Immediately after the American Revolution when the new country first began to establish itself as a substantial and independent nation.

The Boone Trace Corridor is a living classroom that crosses five states, North Carolina, Tennessee, Virginia, Kentucky and Missouri. This is the pathway that Daniel Boone in the late 1700s led thousands of settlers out of the colonies into the wilderness to expand a new nation.  Its purpose is to educate the public of Daniel Boone and the westward movement.

It is a drive yourself tourism adventure to follow the footsteps of the Boone family as they moved west for new opportunity. The journey starts in North Carolina and travels through a series of tourism interpretive stations, offering interpretive displays to educate of the historical events that changed a nation.  It terminates in Missouri. There will be printed maps and digital content to steer the tourist along the way.

As you drive the route, there are many places to drive and walk on the original Boone trace. It winds its way through scenery that was there, when Daniel Boone blazed the trail in 1775. Woodlands, rivers and streams left remnants of this exciting trip through history. Of course it is impossible to see it totally as it was, because time has erased much of the original trace. The pathway was developed into railroads, highways, towns and private property. But what was left is a living museum of frontier history.

Education is the key purpose of the corridor, but it also offers outdoor recreation that connects to it. Each county has developed recreational venues that connect to the trail, woodland and rivers. It can be traveled in full length or visiting segments as time allows. The mapping is divided into three segments. North Carolina, which includes Tennessee, Kentucky that includes Virginia and Missouri. 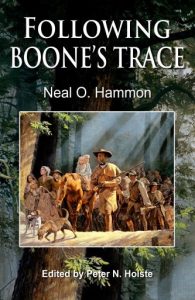 The Boone Society Commissioned Neal Hammon, historian from Shelbyville to author a book that told the story of the Kentucky Boone Trace. It serves as great reading material, but also provides the tourist, a trail guide for traveling the Boone trace Corridor. Our organization has published two of Neal’s writings, “Following Boone’s Trace” and “The Battle of Bluelicks”. Both publications have sold well and we hope to place them in the interpretive centers along the corridor.

Neal help to find the original Boone Trace by researching the land surveys of the late 1700s. He was successful in locating the surveys that reached from the Comberland Gap National Park to Fort Boonesborough. With that, a map was developed by overlaying todays map with the survey sites, We now have a series of maps that cover the entire area.

The Boone Society has developed a series of promotional items for the venture. They have been manufactured and ready to go. Below are some of those items.

The interpretive sins will be placed at historical sites telling the story of the westward movement. Future plans are for QR codes to be placed on the signs. When a person scans the code. It will open up a video of a frontier guide to give the details of what happened there. It can be enhanced to include children with frontier children tell the story in their perspective. These methods are expensive and will only be added with grant funds or corporate sponsorship. See below, the signs created to assist the traveler in directional and learning experience. They are shown below. 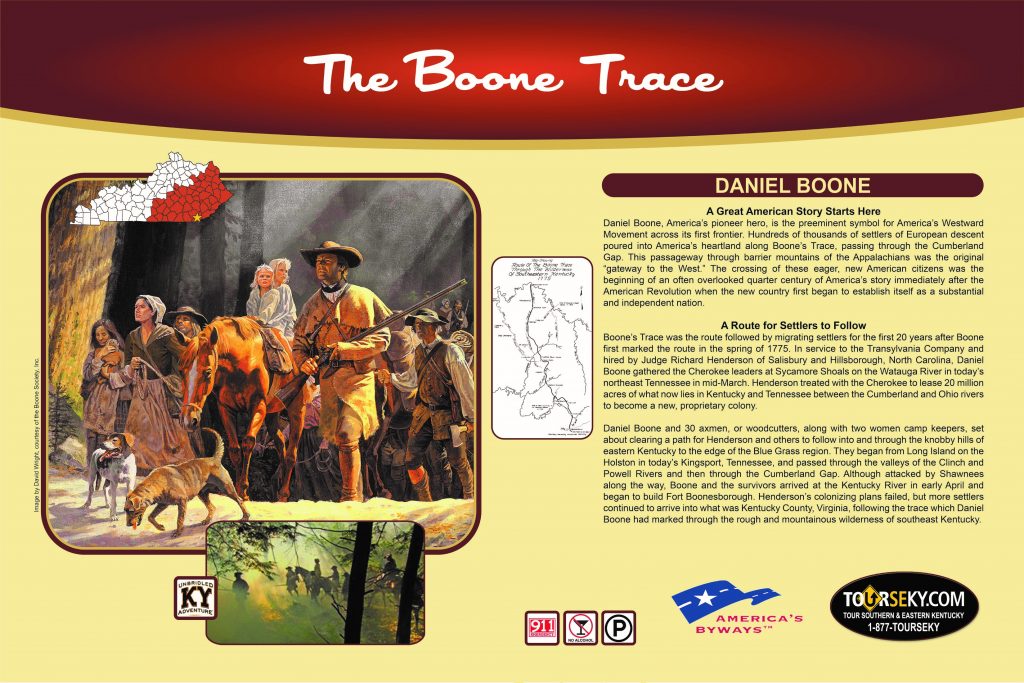 Our first interpretive sign has been placed in Middlesboro, Kentucky. 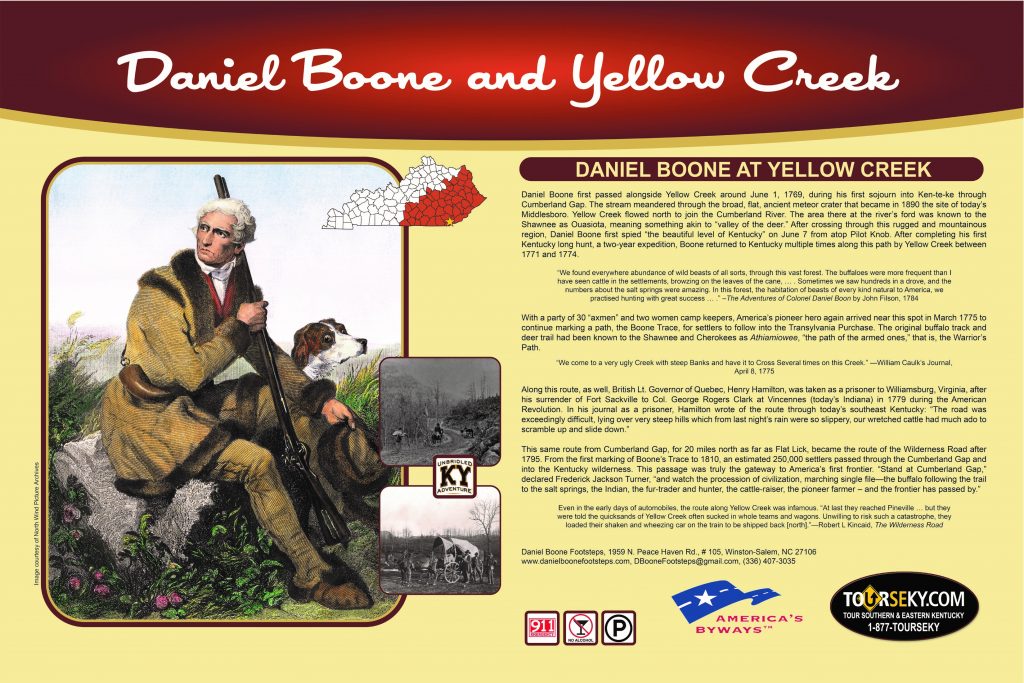 Second sign is along Yellow Creek in Middlesboro, Kentucky 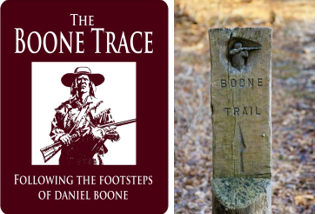 Establishing the Route of the Trace

Mapping of the Boone Trace has been furnished by The University of Kentucky Geography Department with the research from Neal O. Hammon. They produced an evolving map that will be placed upon the Boone Trace page on the Kentucky Tourism website.

This map will be a guide for the public to follow the footsteps of Daniel Boone as it progresses along the 120 mile long route. Places of historical interest, monuments, markers and recreational activities that relate to the Boone Trace will be noted on the map. It will be available in both digital form and printed form, distributed by the Kentucky state parks and visitor’s centers.

Neal Hammon determined the route by researching land surveys of the late 1700’s that used the Boone Trace as a reference point. This established our original route of the trace. To build the Boone Trace Corridor for tourism, two parallel routes are given to navigate the trace. The Boone Trace will never be a continuous walking trail due to being overbuilt with railroads, highways and private property. The first parallel road is Highway 25E and 25 called the Boone Trace bypass. This allows a person to quickly move up the corridor by choosing the site they want to visit. The other parallel road is the secondary roads that give access to the wayside signs and places where they can drive and walk upon the Boone Trace. 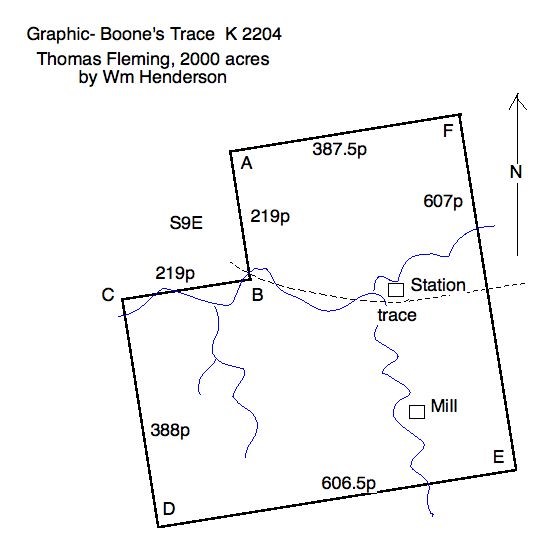 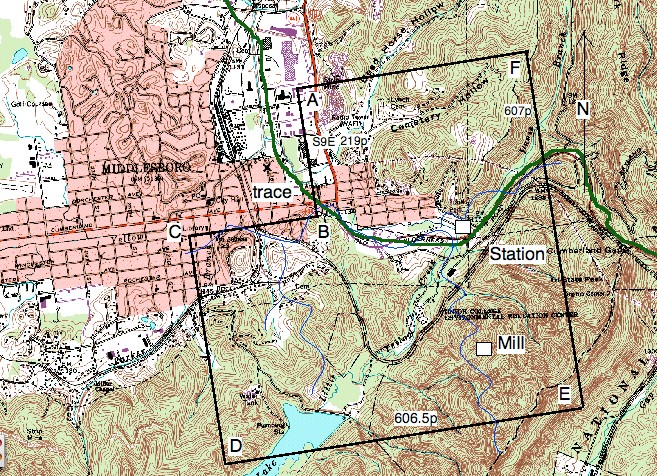 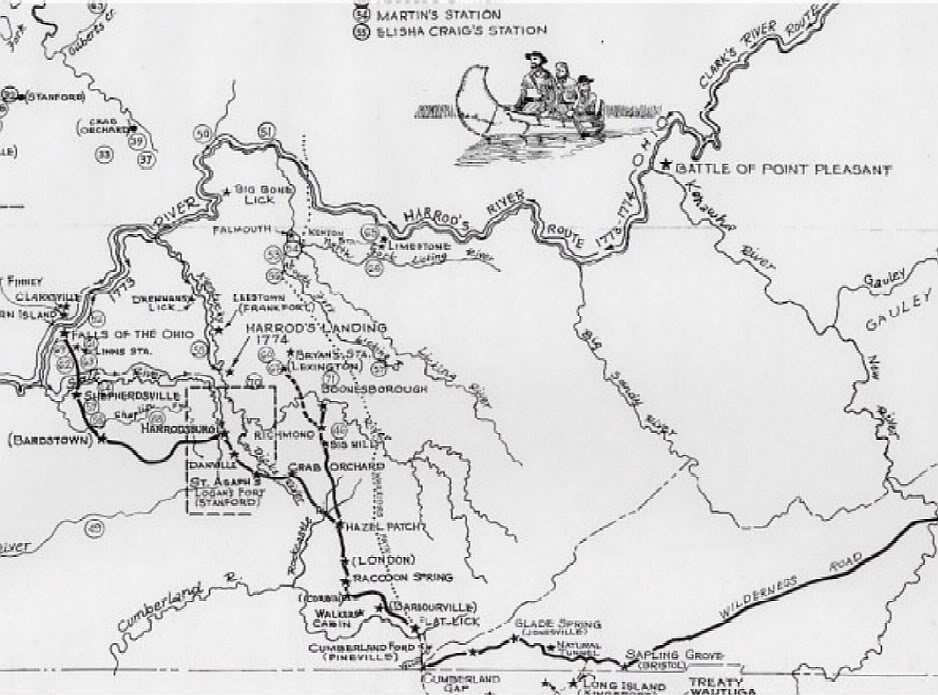 Map of the trails that eventually opened up into Kentucky. Note that the Wilderness Road was created in 1790 for wagon travel. Before that it was the original Boone Trace.

Daniel Boone and the Westward Movement

A film by Native Sun Productions